HOW AN IGNITION DISTRIBUTOR WORKS IN YOUR CAR

Your car’s engine serves as a huge pump. Air and fuel are drawn in, and exhaust is pushed out. Energy is transmitted to the wheels to move your car before the exhaust is released through the tailpipe. None of this would happen without the ignition system doing its job. This system is composed of multiple parts, including an ignition distributor. These parts have to work in precise order for the engine to function. Here’s how a distributor works as well as what happens when one fails.

While all this is happening on the top part of the distributor, there is also a portion underneath which control the charging and discharging of the ignition coil. Decades ago a manual switch referred to as “points” would charge and discharge a capacitor for every single spark plug ignition. Points were okay, but could be finicky at times plus required maintenance. Most manufacturers moved to an electronic ignition pickup in the 1970s which proved far less troublesome and more efficient. Later one cars were built with electronic assisted-distributors, engineered to recalibrate ignition timing for improved efficiency. Settings such as spark advance and retard could be adjusted via computer control, whereas the old method relied on an engine vacuum operated solenoid. Here’s a video of a typical distributor ignition rotor replacement on a Jeep:

The distributor is usually turned by the engine camshaft, either via a gear or directly. The distributor may also drive the oil pump in some engine designs.

Almost every modern gasoline powered vehicle has replaced the spinning ignition distributor with a distributorless system. This new ignition system design places the ignition coil nearly on top of the spark plug, or uses coil packs with multiple connections instead of a distributor cap. A sensor on the engine tells the computer where the crankshaft is at in its rotation, and therefore which cylinder’s spark plug to ignite at that moment. It allows for constantly variable ignition down to the individual cylinder based on performance needs.

A failed ignition distributor is one that simply won’t spark. Failure can happen at any time, causing a running engine to stop or making it impossible for a cold engine to turn over in the first place.

On occasion, the problem becomes evident before outright failure occurs. For instance, if your car shakes while idling, or if you hear a high-pitched squeal emanating from under the hood, then the ignition distributor may be the culprit. Other signs of trouble include engine stalling and backfiring. Sometime parts like the distributor cap or rotor can be replaced, but items like worn bearings or shaft mean a distributor replacement is in order. 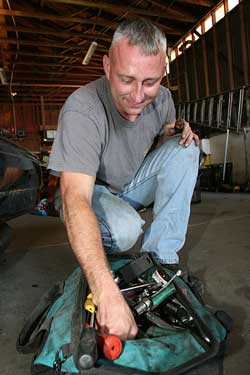 Replacing an ignition distributor in an older vehicle may be one project best left to a seasoned mechanic. In older models, particularly those built in 1985 and earlier, you’ll need to rely on a timing light to set the timing once the new distributor is in place. It can also take a little bit of fidgeting to get the distributor drive gear to drop into place with its matching camshaft drive gear.

Timing specifications or instructions particular to your vehicle are typically found on a sticker located in the engine compartment. You can also find this information in a repair manual specific to the make and model of your car.

If you’re unable to locate the timing marks on the harmonic balancer with a timing light, then distributor replacement should be handled by a qualified technician. If you decide to replace the distributor yourself, you’ll need several tools besides a timing light and repair manual. These include the following: Allen keys, socket wrenches, an offset distributor wrench, combination wrenches, as well as flathead and Phillips screwdrivers. Make things easier by opting for a complete distributor assembly which is ready to drop in and go. Take your time and double check the ignition timing multiple times or else detonation can occur.

In newer models, the replacement task is made easier because the electronically triggered distributor will help you avoid dealing with the setting points. When you’re done, take the old engine distributor to the auto parts store if there is a core refund offered, otherwise dispose of it properly.

What is an Oil Pressure Sensor?

What is a Coolant Temperature Sensor?