What is an ABS Sensor?

An ABS (Anti-lock Braking System) is an enhanced braking system which is commonly found in newer automobiles. An anti-lock brake sensor or ABS sensor is a type of tachometer that measures the rotational speed of a wheel and passes it to the car's Engine Control Module (ECM). The ABS sensor is also called the wheel speed sensor or ABS brake sensor. Since all the wheels do not turn at the same speed, the ABS sensors report the speeds of all the four wheels to the ECM, based on which the ECM determines if the wheels are locking up. The application of the ABS brake is quicker than manual brakes. Due to this, when the ABS is engaged, it emits a grinding noise in some automobiles.

Older configurations of ABS had the sensors located outside the wheel hub in parts such as the steering knuckle and differential housing. The ABS sensor is coupled with a ring gear. The ring is mounted on components such as the brake rotor and brake drum. The ABS sensors in newer systems are fitted in the wheel hub assembly itself. Depending on the type of braking system, vehicles may have as few as one or up to four ABS sensors.

The ABS sensor usually consists of a toothed ring and a magnet enclosed within a coil. The contact between the ring and the magnet induces an electric field due to which a signal is generated. This signal is then transformed into a digital signal and sent to the ABS controller. The controller then determines the speed of each wheel accordingly. 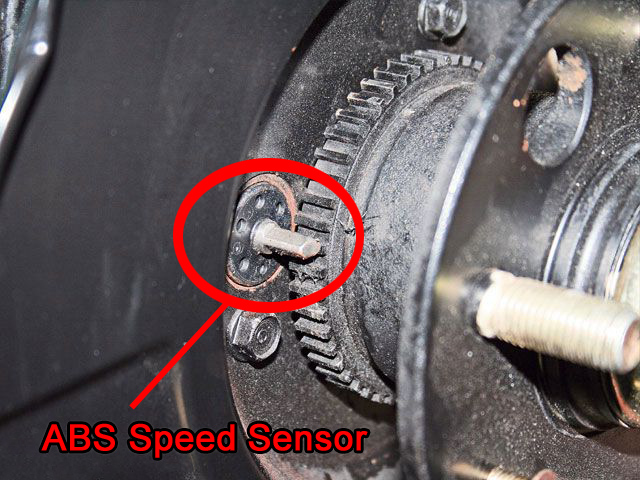 The sensor shown above is a basic sensor that can be found on a Honda but the sensors range in look and size from car to car.

Most later models are equipped with some type of traction control where the ABS sensor is key in controlling the movement of the car under any conditions. During a loss of traction, the speeds of the wheels on one side of the car will be different from those on the other side. These situations are when the on-board computer can regulate the braking power to the wheels, and achieve the desired traction. The ABS sensor is the main sensor that keeps the braking power of a car in check. The sensor transmits the rotational information to the ECM to signal that one of the tires is locked up, in which case, the computer will lower the amount of braking force applied to the wheel in question. As the braking force decreases, the wheel can now turn and regain its grip. Many modern vehicles also have ABS sensors which interact with the electronic traction control systems and stability control systems to ensure vehicle safety.

Over time, exposure to road debris and other impurities can cause the ABS sensor to fail. Cleaning and inspecting the sensors at the intervals specified in the user manuals is vital for its optimal performance. One of the basic indications of a faulty ABS sensor includes the lighting up of the ABS light or traction control light in your vehicle's dashboard. Symptoms of a bad wheel speed sensor also include a considerable loss in traction when you are driving on slippery road conditions.

It is to be noted that the ABS sensor may not always be the culprit; the wiring or connectors can also go bad, failing to transmit the requisite signals to the ECM. So, before checking and replacing the ABS sensor, it is a good practice to inspect its related components and ascertain the right part which is at fault.