How the crankshaft position sensor works 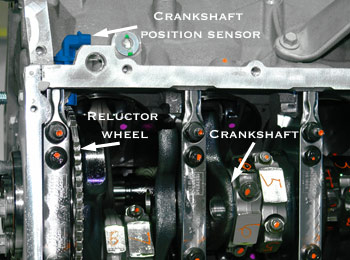 A failing sensor can cause intermittent problems: a car may cut out or stall randomly, but then restart with no problems. The engine might have troubles starting in wet weather, but starts OK after. Sometimes you might see the RPM gauge behaving erratically. In some cases, a failing sensor can cause long crank time before the engine starts. If the sensor is bad, the engine will crank but won't start. Read more: Why an engine cranks but won't start: common problems. 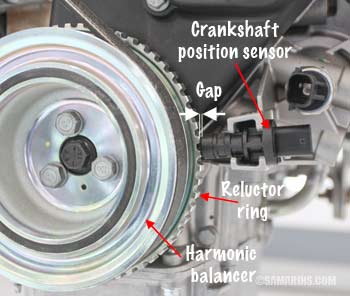 How the crankshaft position sensor is tested

Whenever there is a suspicion that the problem might be caused by a crankshaft position sensor or if there is a related trouble code, the sensor must be visually inspected for cracks, loose or corroded connector pins or other obvious damage. The proper gap between the tip of the sensor and the reluctor ring is also very important. The correct testing procedure can be found in the service manual. We posted a list of websites offering paid access to service manuals for different cars at the bottom of this article: Check Engine Light: What to check first, repair options. For the pick-up coil type sensors, the testing procedure includes checking the resistance. 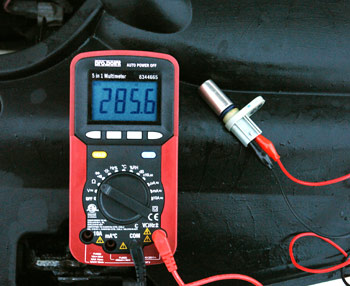 The resistance of this crankshaft position sensor from
the 2008 Ford Escape measures at 285.6 ohms,
which is within specifications
For example, for the 2008 Ford Escape, the resistance of the crankshaft position sensor (CKP) should be between 250-1,000 ohms, according to Autozone. We measured 285.6 ohms (in the photo) which is within specifications. If the resistance is lower or higher than specified, the sensor must be replaced. For the Hall-type sensors, the reference voltage (typically +5V) and the ground signal must be tested. The most accurate way to test a crankshaft position sensor is checking the sensor signal with an oscilloscope. Sometimes, the sensor may have an intermittent fault that is not present during testing. In this case checking for Technical Service Bulletins (TSBs) and researching common problems may help. 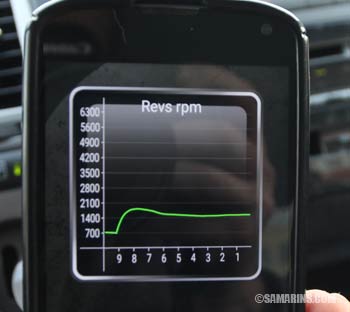 Replacing a crankshaft position sensor is not very expensive. The part costs from $35 to $115 plus $55-$130 for the labor. It's best to use an OEM part. In most cars it's fairly easy to replace, although sometimes the sensor could be difficult to remove due to corrosion. See these Youtube videos for more info. When replacing a crankshaft position sensor, it's important to verify the proper gap between the sensor and the reluctor ring teeth.

How an ignition coil works

What is TPMS & How Does it Work?